The state-of-the-art research vessel Maria S. Merian was designed to perform research at the ice boarders of the arctic sea as well as the open sea worldwide. Named after Maria Sibylla Merian  this multidisciplinary research platform is equipped with outstanding facilities which allow the use of all modern methods of investigation of the sea-bottom, the water and the atmosphere. 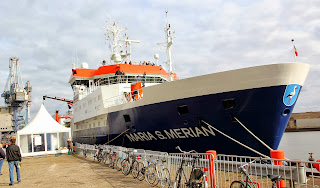 On 21./22. September 2013, the Maria S. Merian anchored in Bremen and was open to the public. Around 3000 young and old visitors enjoyed a diverse program of guided tours of the ship, activities for children, movies and lectures, exhibitions and much more. Scientists from the Center for Marine Environmental Sciences (MARUM), Environmental Physics (IUP), the Max Planck Institute for Marine Microbiology (MPIMM), the Alfred Wegener Institute of Polar and Marine Research (AWI) and Jacobs University Bremen were present and explained how samples are taken and examined, how underwater robots work and how bacteria can survive in the ocean.

The Micro B3 prject and the Ocean Sampling Day (OSD) were represented by Frank Oliver Glöckner, Julia Schnetzer, Michael Richter and Anna Klindworth. It was a great opportunity to introduce the OSD citizen science project and raise awareness for the importance of marine microorganisms in times of climate change. We enjoyed fruitful dialogues with many interested citizens and were stunned by childrens creative drawings of marine microbes.

Kids drawings of marine microbes from the Open Ship Day can be found at
www.my-osd.org 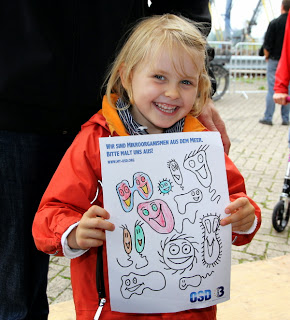 The Micro B3 Consortium has teamed up with the multimedia company Mediomix to initiate a Crowdfunding Campaign to support Ocean Sampling Day and to produce a movie about this important and unique event. Scientists and citizens will collaborate on OSD in a completely new way. Everyone can join the OSD Citizen Science Project and support the scientists by recording water parameters such as temperature and phosphate and send their results directly to a central database with a Mobile Phone App. This way all supporters can not only help finance the event and raise awareness, but also have the opportunity to actively participate in the project! The OSD Crowdfunding Campaign starts on October 1st and runs until November 10th (UNESCO World Science Day), 2013.


Our oceans have made life on this Earth possible, and we believe that the time for us to pay back is now. Be part of science! Be part of something amazing! Be a citizen scientist!

To find out more information about the OSD Citizen Science Project and how to participate, please check the following link:


Help us to spread the word. The official hashtag is #OSD2014 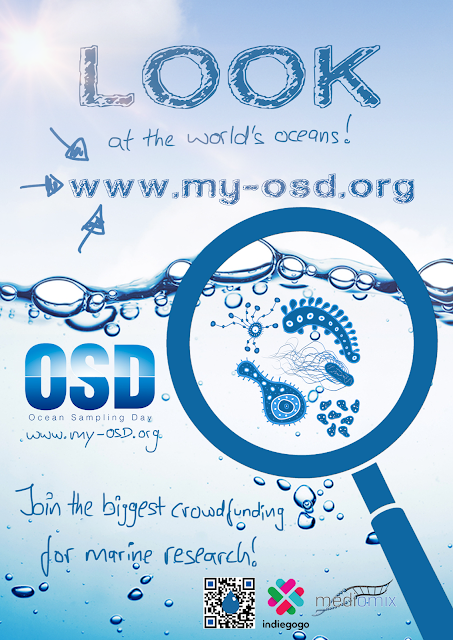 Rothera is the British Antarctic Survey research station, located on Adelaide Island on the Antarctic Peninsula at 67° South (http://www.antarctica.ac.uk/living_and_working/
research_stations/rothera). Like last year, we were planning to get out on the actual Ocean Sampling Day but were stopped by the weather and ice conditions. We had fast ice in Ryder Bay which prevented us from getting a boat in the water. However, as the ice was staying longer and longer, we were getting very excited about the possibility of doing a CTD and water sampling through the ice! When it was finally signed off, we were ready to go but the wind once more was in our way. Luckily, we were able to dive through the ice as it is closer to the shore and less dangerous. Then, we experienced why Antarctica is called the windiest continent on the planet. After a weekend of around 40-50 knots winds, half the sea ice in Ryder Bay had been blown out. Luckily, this meant we were able to get a boat into the water on the first calm day (just before the sea started freezing again).

We got out to Site 2 (67°34.850 S, 68°09.340 W) on the 22nd of July. Site 2 is one of three sites commonly used for the RaTS (Rothera Biological and Oceanographic Time Series) sampling (see Picture 3). We sampled just on the edge of the fast ice. The day started off very calm, but winds were picking up later on and finished just in time before we would have had to abort the sampling. The air temperature was only around -5°C. The water temperature was similar to last year -1.52°C. We deployed the CTD to 300m and winched it back up again by hand. Afterwards we collected water samples from 15m with our Niskin bottles.

Same as last year, we filtered 2l for each filter. However, on the ship last summer we finally got some Sterivex filters in which we used (4 replicates). They were frozen immediately with liquid nitrogen and are being stored in the -80°C freezer until the ship next March picks them up together with the samples from our Ocean Sampling Day in the summer.

The RaTS program includes various aspects of sampling. With our CTD we measure depth, salinity, temperature, PAR and fluorescence and the water samples we take back are mostly bottled up for analysis back in the UK by a number of different institutes. We analyse chlorophyll and ammonia in our lab here at Rothera. Whereas analyses for HPLC, nutrients, CO2, salts, isotopes, DOC, viruses, Barium and metagenomics is conducted elsewhere.

Posted by Mesude Bicak at 03:24 No comments: