Stickers for Micro B3 and OSD - NOW AVAILABLE

Dear Micro B3 and OSD Partners and Friends,

We are happy to announce that stickers for Micro B3 and OSD are now available! Within the next couple of days the stickers will be sent to the WP leaders and other Micro B3/OSD partners to distribute them among the community.

So with a little help of YOU we hope that they will help us advertising the Micro B3 project and Ocean Sampling Day WORLDWIDE.

Stickers are FOR FREE


Therefore do not hesitate to contact one of the local Micro B3 and/or one of the OSD partners. You can also send us an email (contact@microb3.eu). We try to ship them to you as fast as possible.

The Micro B3 Team 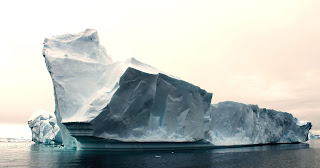 Rothera is a British Antarctic Survey research station, located on Adelaide Island on the Antarctic Peninsula at 67° South (http://www.antarctica.ac.uk/living_and_working/research_stations/rothera). The plan was to sample on the Summer Solstice (21st of December) however our first resupply ship since March (the RRS James Clark Ross) arrived on that very day, suspending boating activities whilst the whole base was involved in unloading a year’s worth of cargo (including Sterivex filters!). We were able to sample on the 27th of December. 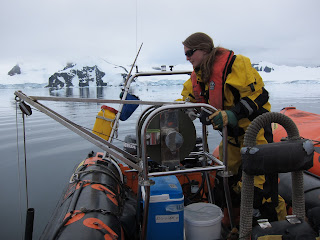 The Rothera Oceanographic and Biological Time Series (RaTS) has been running since 1997 and continues year round – collecting data through weekly water sampling and CTD events. We sampled for the Winter Solstice OSD earlier in the year (albeit 6 weeks late due to sea ice conditions!).
For this sampling event we were able to get to the primary RaTS sampling site (67°34.400’S 68°13.500’W). The weather was calm but overcast, and on the way to the site we were fortunate enough to have a pod of ~12 orca join us! They were very interested in the boat and were clearly seen ‘spyhopping’ icebergs in their search for seals. The air temperature was 3°c (18°c warmer than our winter sampling event) and the water temperature at 15m (the RaTS sampling depth) was -0.46°c (over a degree warmer than the winter sampling event). 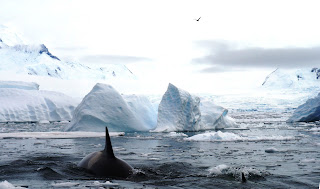 We first deployed the CTD to 500m (winching by hand!) and then collected water from 15m. In contrast to the last OSD sampling event there is an abundance of life in the water here as it is the Antarctic summer, so I collected 4 x 1l samples. It was not feasible to filter on site so the samples were transported back to the laboratory to be filtered and frozen at -80°c. I filtered 2 x 1l with the newly arrived Sterivex filters and 2 x 1l with the GFF filters I used for the last OSD event.

The routine sampling for the RaTS program also means we have data for chlorophyll and ammonium concentration, as well as samples preserved for HPLC, CO2, salts, isotopes and nutrient analysis. This along with the CTD cast (temperature, salinity, PAR and fluorescence) creates an excellent data set.

There are now many OSD Co-ordinators. We expect to have more of them in the future.

As part of ramping up coordination of OSD we are having four telecons a week (see outline below). Until further notice all telecons are on Skype. If you'd like to join, please send an email to osd-contact<at>microb3<dot>eu and give your Skype handle.

1. Tuesday at 4pm (UK Time) - OSD Community Telecons I
All welcome, any questions and queries with OSD will be addressed by the OSD Core Team.

2. Tuesday at  11am (UK Time) - OSD Community Telecons II
All welcome, any questions and queries with OSD will be addressed by the OSD Core Team.

3. On Request: Wednesday at 8 pm or sometimes at 10pm (UK Time) - OSD Community Telecons III
This time slot is available on request specifically for OSD participants in and around the Pacific time zones. For example, UTC + 12 hours.

You can view the agenda for all calls here:
https://docs.google.com/document/d/1Zvr4-mTWE2aPyVcyg3UdzTcVyyLZDfQ9G41inwI8saA/edit#heading=h.vswt7x483a9z
Posted by Mesude Bicak at 03:47 No comments: