Sampling was performed at the SOMLIT-Astan long-term observatory site (48° 46' 40 N, 3° 56' 15 W) at 10:30 local time during the 2012 summer solstice. Water was collected from a depth of 1 meter using a Niskin bottle. Water samples were transported to the lab in an acid cleaned plastic bottle within 15 minutes and filtered. Within 30 minutes, 4 replicates of 1 liter were filtered for metagenomic analyses using the Sterivex 0.22µm filters. Filters were sealed and immediately frozen at ‐80 °C in individual zip‐lock bags.

Pictures were taken by Service Mer-Station Biologique de Roscoff
Posted by Unknown at 00:15 No comments:

Rothera is a British Antarctic Survey research station, located on Adelaide Island on the Antarctic Peninsula at 67° South http://www.antarctica.ac.uk/living_and_working/research_stations/rothera . The plan was to get out and sample on our Winter Solstice (20th June), which for most of OSD partners was the Summer Solstice. Unfortunately sea ice and wind were against us and we didn’t manage to get out to sample until the 31st of July. The sea ice formed the week before the Solstice and was too thick to get one of our RIBs (Rigid Inflatable Boat) through, but too thin to walk on. The ice then thickened up and we were able to go for short walks and even dive through it near to the shore; however it was too dangerous to go too far offshore and get to our sampling sites. The winds picked up towards the middle of July and blew the sea ice out – but the winds remained too high to launch the boats, sometimes even blowing the ice back in. This continued for a few weeks until finally we had a window where there was an area of open water leading toward the sample site and no wind! The Rothera Oceanographic and Biological Time Series (RaTS) has been running since 1997 and continues year round – collecting data through weekly water sampling and CTD events. http://www.antarctica.ac.uk/staff-profiles/webspace/mmm/RaTS/RaTS.html 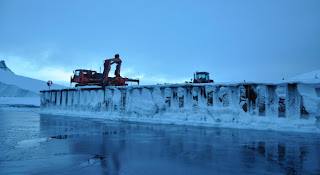 The wharf was pretty frozen up and new sea ice was starting to form. On the 31st July our primary RaTS sampling site was under fast ice, so we took our samples from the back-up site 2 (67°34.850 S, 68°09.340 W). The weather was calm and, although we have recently seen the return of the sun, unfortunately it was overcast. The air temperature was -15°C and the water temperature -1.7°C. We first deployed the CTD to 300m (winching by hand!), then collected water with a niskin bottle from 15m (the depth that all RaTS sampling is done). I was hoping to collect 5l for each replicate as there is so little life in the water during the Antarctic winter, however the engines were starting to freeze up so I collected 4 x 2l samples. It was not feasible to filter on site so the samples were transported back to the laboratory to be filtered and frozen at -80°c. 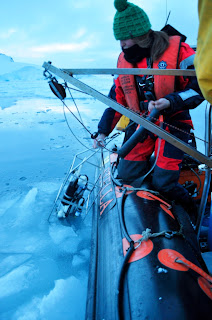 Lowering the CTD from Stella. We do not have Sterivex filters and as we are isolated from the outside world from March until October and unable to get in supplies I had to make do with the filters that I had in the laboratory. I filtered 2 x 2l with GFF 47mm filters and 2 x 2l with 0.2um polyester membrane filters. The routine sampling for the RaTS program also means we have data for chlorophyll and ammonium concentration, as well as samples preserved for HPLC, CO2, salts, isotopes and nutrient analysis. This along with the CTD cast (temperature, salinity, PAR and fluorescence) creates an excellent data set. The Summer Solstice (which is the Winter Solstice for most of OSD’s partners) will be so much easier! 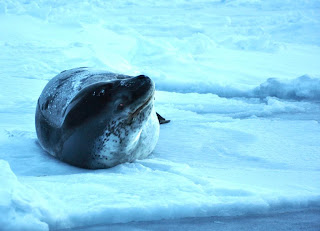 We met this guy – a leopard seal (Hydrurga leptonyx) on the ice edge.