The Smithsonian Institute's BioRepository (Museum Support Center (MSC)), also serves as OSD's BioArchiving Facility! It is a collections storage and conservation facility which houses Smithsonian collections which are not on display in the museums. BioRepository also houses material for projects in biodiversity, phylogenetics, population genetics, toxicology, environmental monitoring, etc. since the early 1970s. It is a state-of-the-art storage and conservation facility and its climate-control system maintains the desired environmental conditions in all areas of the building year-round. (See the MSC webpage for further details.)

OSD samples will be stored at the -80°C mechanical freezers of the lab!

All freezers and refrigerators in the Biorepository are continuously monitored by an electronic system that calls responders during an outage or other emergency. This monitoring system is also accessible via a secure web application, so freezer temperatures can be checked remotely at will. In addition, state-of-the-art tracking and barcodes systems allow you to easily find and track your samples. So we can be sure that our OSD samples stored at the MSC are safe and trackable :)

As part of the tour, BioRepository Coordinator Chris Huddleston also introduced as to the Sampling Robot, which is used to position and label sampling tubes with the barcodes/vouchers that are used for identification.

As part of OSD Pilot, two samples from the OSD Sites Helgoland & Belgium were sent to the BioRepository. We were very excited to find them enjoying their new home at the BioRepository freezers! Special thanks to Antje Wichels (OSD Helgoland Site Coordinator) and Simon Claus & Klaas Deneudt (OSD Belgium Team) for their magnificent efforts and making the pilot pipeline a success! 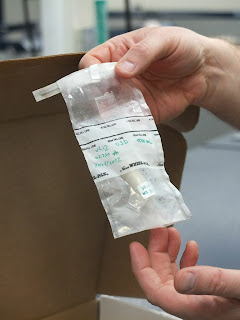 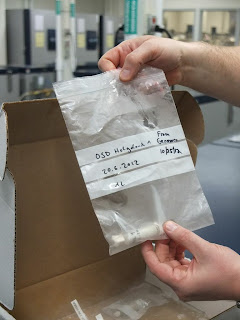 
BioRepository also contains large liquid nitrogen freezers which allow storage at -196°C (-321°F). We had a great time exploring them!